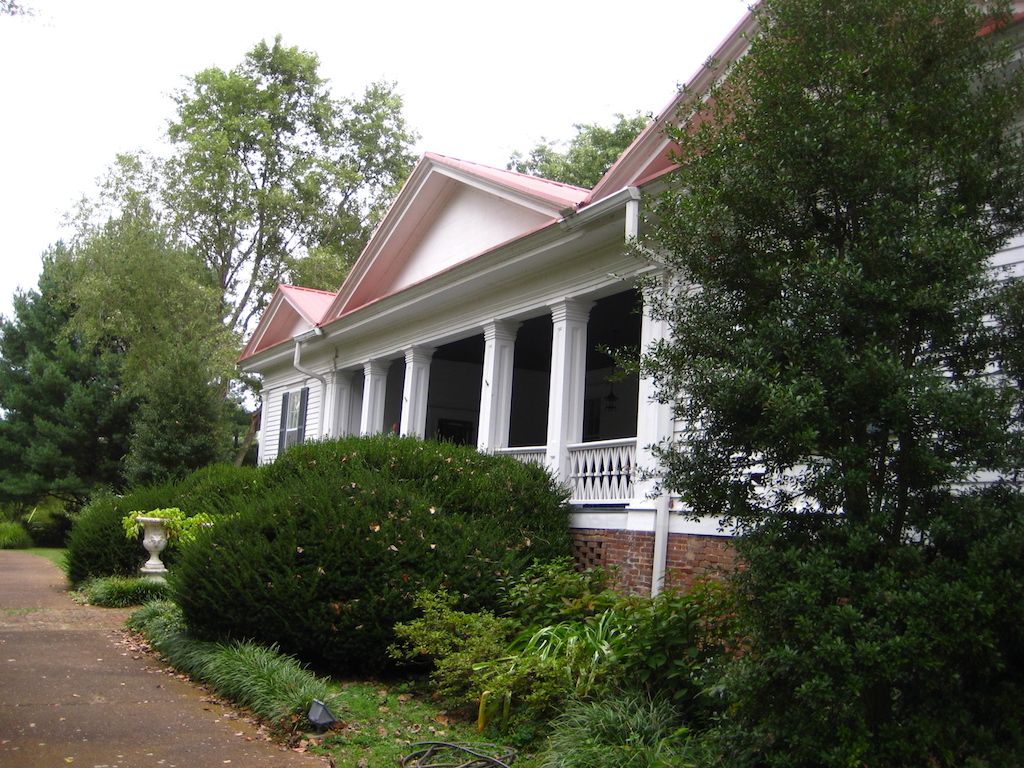 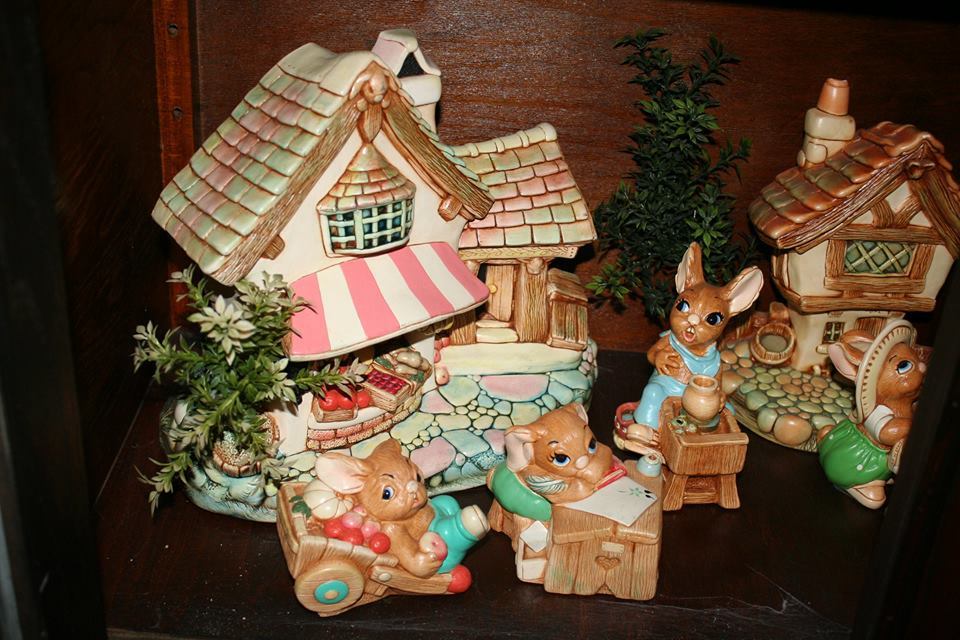 In 1953 two British housewives began making plaster of Paris dolls for their children. This “hobby” has now grown into an international business with hundreds of Penfelfin Rabbit characters. Many in the Rouleau collection are now retired and no longer available. 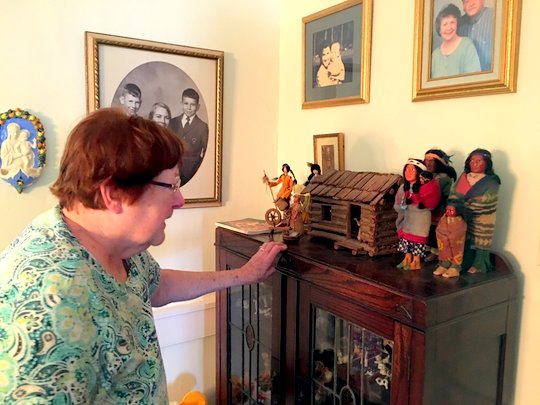 The Skookum Indian dolls are from Mrs. Rouleau’s childhood. Growing up in Kansas City playing with Native American dolls was a frequent pasttime. 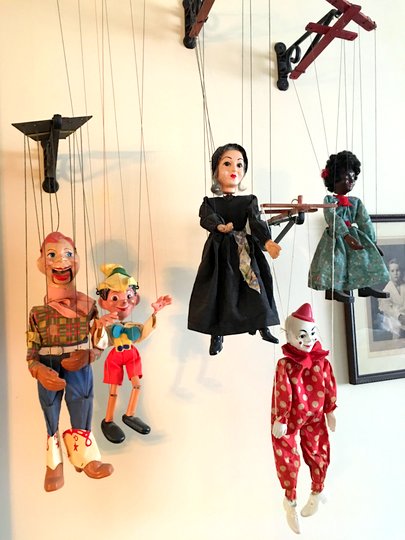 The marionettes were made by Mrs. Hazele Harriet Rollins. She was born and raised in Kansas City and was a contemporary of Mrs. Rouleau’s mother.  She taught at the Nelson Atkins Art Institute in Kansas City (where Bennita Rouleau also studied).  She created over 300 original puppet characters and at one time was the premier, world renowned marionette maker. 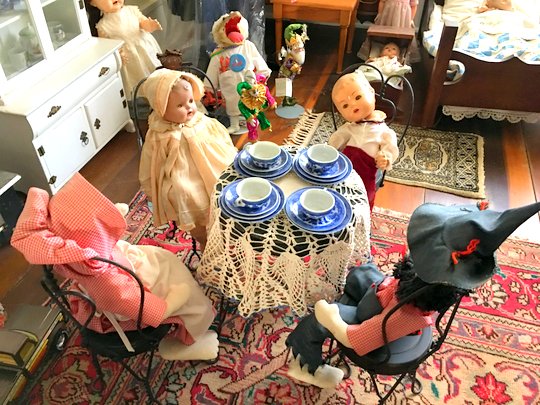 Several children’s tea sets are included. The blue willow set is from Mrs. Roulelau’s childhood. The few pieces of Royal Bayreuth Sunbonnet Babies belonged to Mrs. Rouleau’s mother, as well as the collection of Kewpie dolls, several having Rosie O’Neels stem on them.

When Lairdland Farm House was being built, ceramic and pottery makers in England were reaching their zenith. Both in quantity and quality of ceramic goods, this was a period of enormous creativity and productivity. Earlier methods of hand decorating plates and service pieces gave way to new techniques of creating a pattern, or cartoon, then transferring it to the surface of the piece and applying colored glazes. This significantly speeded the process and made possible the duplication of a pattern upon an entire set of dinnerware. This increased production satisfied the desires of the rising of the English Middle Class.

At Lairdland Farm House you will find a number of examples of English transfer ware dating from 1805 to 1885.

During the same period potters began making ornamental, low cost-figurines portraying current events, people and places. Designed for the working class market, most of them were made by child laborers, who were heavily employed in the Staffordshire potteries. The figurines that have survived tell a story of the times and the interests of the working class. They possess an almost primitive, certainly naive charm.

In the living room and dining room of Historic Lairdland Farm House displayed are several examples of Japanese Imari porcelain.

Imari is the name given to the world famous Japanese porcelain produced in Arita, Hizen province (modern Saga-prefecture) on the Island of Kyushu and other locations. The name Imari was taken from the Japanese port town from which the porcelain was shipped to other parts of Japan and abroad by the Dutch. While the earliest Imari was produced almost entirely at Kyushu/Arita area kilns, by the mid 19th century, kilns all over Japan produced porcelain. This porcelain is a distinctively hard and white kind of clay fired at a relatively high temperature of 1,280 degrees Celsius.

The Imari exhibited at Lairdland Farm House has cobalt blue undercoat with bright enamel colors, including the distinctive red, painted on top of the initial fired porcelain. Imari was exported to European countries, especially England, and to the United States, principally through the port at New Orleans during the late 18th and early 19th centuries. English potteries copied the patterns and colors. Today, Royal Crown Darby still manufactures their “old Imari” china.

You will take a step back to your childhood – or perhaps your grandmother’s – when you visit our collection of vintage dolls and toys. Among our dolls are bisque head dolls made by Armand Marseille, Kestner, Dressel and Kammer & Reinhart. Some of the china-head dolls date from the mid 1800s. There are also several pieces of children’s furniture: a dressing table and a toy china cabinet, rocking chairs, trunks and an early East Tennessee handmade high chair from Grainger County, Tenn. The collection includes several composition dolls from the 1940s, as well as teddy bears. Tiny china tea sets, doll beds, blocks and children’s books round out the collection.

In early 1900s toy makers began making “realistic toys” for little girls. The antique stove is wired for electricity and will actually heat up when plugged in. The picture blocks, also dating to early 1900, are still contained in their original wooden box, each side telling a different story.

As a child Mrs. Rouleau wanted a train set. After she and Mr. Rouleau were married he decided to build one for her. Of course, with his love of the Cvil War period, the train and its surroundings had to picture a Civil War Cavalry camp. Today it requires constant attention since the family cats love it, too.

Don Rouleau has displayed his collection of antique key wind, key set pocket watches at Lairdland Farm House. Almost all of the watches are American made, an art that is lost to modern technology. These watches date from the late 1700s (a chain and fusee watch) through the beginning of the 20th century. Most are late 19th century.

Next to his firearm, a man’s pocket watch was most likely his most expensive possession. Cared for and handed down through generations, these time pieces were prized not only their practical use but for their beauty as well. Many have gold or silver cases, while less expensive ones have cases of nickel silver or brass.

Gentlemen wore their watches with panache at the end of a watch chain, attached to their vest or stored in a little pocket in their trousers specifically designed for that purpose. Frequently a watch fob, or ornamental object, was also attached to the chain. Idly fondling his watch, playing with the chain, etc., a gentlemen’s preoccupation with his watch was similar to a lady’s involvement with her fan. In Victorian times it was an acceptable pastime.

As technology advanced their design, the watch key gave way to stem wound watches. Several examples of stem wound watches are included in the exhibit. Also shown are a variety of watch keys, watch fobs and watch chains. Finally with the coming of the wrist watch, pocket watches fell out of favor and the last American watch companies closed their doors.